An English translation of 黃帝陰符經

Behold Heaven's Way (Dhoe), and act according to Heaven's motions, that is all.

In Heaven there are five thieves, those who see them will be thriving. The five thieves dwell in the Heart and carry out their motions in Heaven, thus the universe can be grabbed into your hands, and all creations can happen within your body.

The Heart generates both cleverness and clumsiness, it can be calmed and concealed. The leaking from the nine holes (*) is controlled by the three pivots, it can be intense or mild.

(* The nine holes of the human body : Two eyes, two ear holes, two nostrils, mouth, the outlet of the genital, and anus)

When Fire(*) is produced from Wood, if a disaster comes, it can be defeated. When Evil emerges from within the nation, a wrong action at that time will lead to a dike breaching.

(* The five circulations : Gold, Wood, Water, Fire, and Soil, also known as the five types of energy, or the five basic elements. )

If one understands these, and forges and refines himself accordingly, he is called a Saint. Heaven gives life, and Heaven takes life, this is the principle of Dhoe.

The middle chapter -- Enriching the Nation, Appeasing the People, and Preaching the Law

Heaven and Earth steal from (stealthily deprive) all things. All things steal from Man. Man steals from all things. If these three types of stealing are well settled, the Three Entities (*) can be appeased.

Therefore it is said: Ingest at the right time, your body containing hundreds of bones will be recuperated. Act at the pivotal time, all the creations will be well sustained. A person who knows his own holiness becomes holy. His mind being free of unholiness is the reason why he becomes holy.

Days and months go by as the sun and moon move. When a certain number and size are reached, the Holy Work is born and the Luminous Divinity comes out. The stealings that happen at the pivotal times are unseen and unknown to the world. A highly moral person who gets it ( by ‘stealing’ ) can strengthen his body. An amoral person who gets it would slight his own life.

The last chapter -- Strengthening the Army, Gaining Victory, and Demonstrating the Technics

Blind people usually have good hearing. Deaf people usually have good vision. Cut off the energy supply to one sensory channel, the Army (of energy) will be ten times stronger. If the Three Outflows are reversed all day and all night, the Army will be ten thousand times stronger. The Heart can be activated by things, and can die because of things. The key is at the Eye.

A fool may become wise by studying the writings and theories about Heaven and Earth. However, I study the writings and theories to master the timings and substances and therefore become philosophical. While others are foolish because of worrying, I am free of foolishness and therefore become holy. While others wait for sacred dates to do worship, I do not wait for sacred dates but cultivate every day.

Hence, sink Water into Fire, let the annihilation happen by itself. The Way of Self Thusness (*) is tranquil, and from within it the Heaven, Earth and all creations come into being.

(* The Chinese term 自然, which is often translated to ‘nature’, literally means Self Thusness — It is that way by itself, independently and unconditionally. It is not created, and it is not conditioned / restricted by time, environment, or anything. )

The Dhoe of Heaven and Earth is omnipresent and embraces everything, so that both Yaam and Yeong can receive nourishment and grow. Yaam and Yeong push each other to construct everything, in this way all the creations and transformations are well arranged.

A Saint knows that the Way of Self Thusness should not be violated, therefore he does not interfere with the ongoing creations and evolutions, but keeps himself in the ultimate calmness for a period of time that cannot be measured by any calendars.

So here is a Miraculous Vessel, inside which myriads of things manifest. The Eight Trigrams (*) and the Gup-Tzee system (*) contain the mysteries of gods and secrets of ghosts.

(* The Eight Trigrams : An energy model consists of eight fundamental energy forms that construct the whole world. These eight energy forms are depicted as Trigrams and called ‘GWA’s (卦).

(* The Gup-Tzee system : A cycling time system in which every 60 years is called a Gup-Tzee (甲子). Each year in a Gup-Tzee is supervised by a deity, so there are totally 60 deities who supervise all the years. )

Once these mechanisms about time and energy are understood, the technics to perform miracles can be mastered, so that the interactions and mutual invigorations between Yaam and Yeong can be clearly manifested in the world.

(End of the Translation)

(Translated into English by Silfong Tsun)

Popular posts from this blog

An English translation of  妙法蓮華三昧祕密三摩耶經 A Vajrayana ( Indestructible Vehicle ) explanation of Saddharma Pundarika Sutra ( Lotus Sutra ). Alternative Title : Sutra on the Secret Teachings  regarding  the Samadhi [1] named True Dharma White Lotus The Eight-Petaled Lotus Flower which Symbolizes the Heart  ( the central part of Womb Store Realm Mandala ) : The Beginning Chapter Maha-Vairocana the Bhagavan who illuminates universally, along with an ocean-like grand assembly of Eternally Quiescent Light [2], wanders throughout the Dharma Realm Palace, and enjoys the Bliss of Dharma. The Bhagavan descends from the Tathagata Lifespan Vajra to the Great Compassion Womb Store, and says these verses of Self Awakenment [3] : “Homage to the originally awakened Heart’s Dharma Body, Which constantly stays on the Miraculous Dharma Lotus Platform of Heart. Originally it has sufficient merits for the Three Bodies [4], And there are Thirty-seven Lords [5] dwelling in the nation of Heart. The Samadhis of
Read more 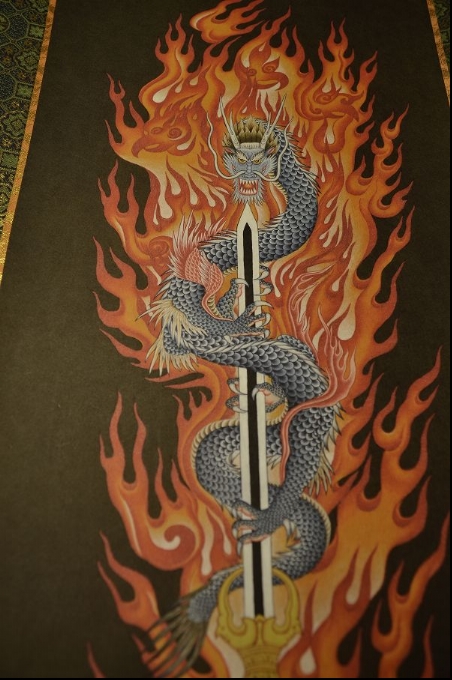 An English Translation of  佛說俱利伽羅大龍勝外道伏陀羅尼經 (Taisho Tripitaka 1206)   Thus I have heard: At one time, The Buddha was in the great city Raja-griha. At that time, Ratna-ketu ( Treasure -Banner) Dharani Bodhisattva asked the Buddha : "Why does great dragon Krkala hold a sharp sword in his mouth, and wrap his four legs around the sword ?" The Buddha told Ratna-ketu Dharani Bodhisattva : "At one time in the past, in the highest Heaven of Form Realm (Akanistha), in Mahesvara (Great Omnipotent God)’s Knowledge Victory City, when Moveless Luminous King (Acalanatha Vidya-Raja) was debating with a number of Exterior-path practitioners, both sides manifested myriads of miraculous transformations to prove their wisdom.” "At that time, Moveless Luminous King (Acalanatha Vidya-Raja) transformed himself into a Wisdom Fire sword." " Meanwhile , there were 95 types of Exterior-path practitioners. Their Leader, whose name is Wisdom Achievement, also transformed himself into
Read more